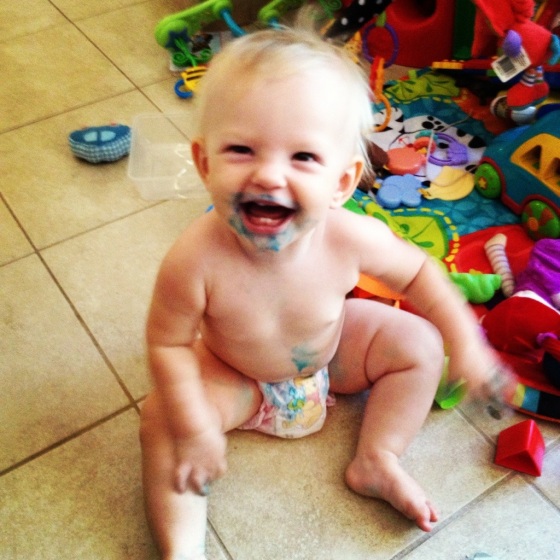 Food colouring isn’t bad for kids… is it?

A friend of mine told me a few weeks ago that I should colour some bits of dried macaroni pasta with food dye so that Ayla can play with different colours which is apparently good for her development.

I was feeling crafty a couple of days ago and made up four colours of pasta, but I quickly realised that Ayla would simply eat the pasta and that the food dye ran very quickly after being in her slobbery gob.

So I packaged it up and made a colourful rattle instead, which has worked just fine considering Ayla loves anything even half musical.

But today Ayla somehow discovered a rogue piece of pasta and she made a right mess of it… and herself!

I had been busy on the computer, and when I turned around I could see blue dye all over the tiles, the toys and all over Ayla.

Ayla was stoked! She could see that her hands, feet and tummy had turned blue and thought it was a great game, then when I took her to the bathroom to try and wash it off Ayla caught a glimpse of herself in the mirror and started giggling.

I scrubbed for a bit and removed some of the excess dye but Ayla’s porcelain skin still has a delicate tinge of blue, but hopefully not for long!