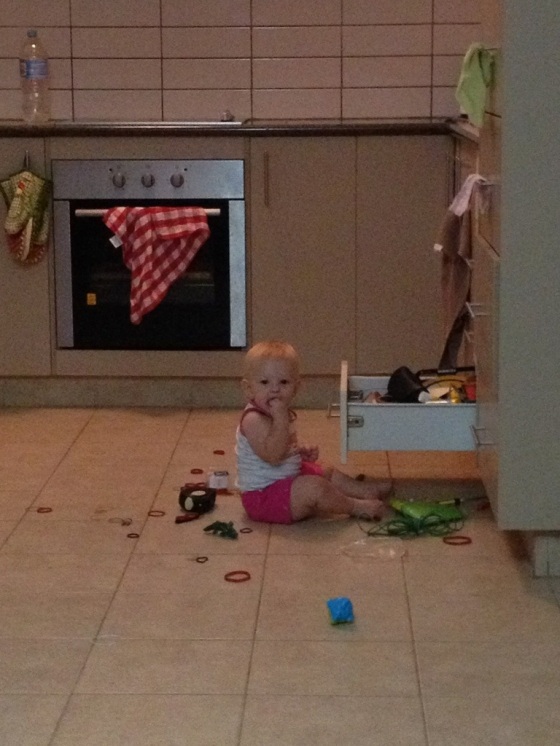 Today was D-day (“D” standing for Day Care”) and it ended in disaster.

The morning started off smoothly and to plan; Ayla had slept well, she had some breakfast, a bath, and I even got her day care bag all ready complete with labeled clothes and expressed milk.

At around 10.30am Ayla was looking tired, and although she was rubbing her eyes a little earlier than I expected I decided to put her down for a nap and planned to get stuck into my uni readings, preparing the dinner and doing some washing while she slept.

But by midday Ayla still hadn’t slept – apart from accidentally falling asleep for 10 minutes while I was feeding her – andI was completely frazzled.

The washing was beeping, the frying pan was burnt from being on without having anything in it, the flies were trying to get to my half chopped veggies, I hadn’t gone near my computer and Ayla was crying. It was overload to my stress levels.

Ayla was just really clingy, she would settle in my arms but as soon as I put her down she would start coughing then wake up and cry. This cycle went on, and on, and on, until Ayla’s eyes were red ringed and darkly shadowed and my nerves were completely shot.

I knew there was something wrong that was keeping Ayla from sleep, whether it was a virus, her teeth or something else, which made me feel bad for her and had me questioning my own judgement about leaving her at day care while I went off to uni.

In the end, I couldn’t bring myself to take Ayla to her first afternoon at day care when she was so tired, upset and irritable so I made the decision to give Week One at uni a miss in order to take care of my baby girl.

Although I was happy with my decision, I think all the stress and pressure of the last couple of weeks finally caught up with me and I found myself in tears anyway.

Thankfully, like a knight in shining armour, Hubby came to the rescue by taking the afternoon off work to come home and look after Ayla.

It was a gesture so small and simple but it meant I got a whole three hours to myself to de-mummify, engage with a world outside my four walls and do something purely for me.

We’ll just have to try day care again next week.