My Mum and I took Ayla to a nearby park today, and then for a little walk around a community garden.

Ayla LOVED the garden; stopping to look with cautious awe at the bright and colourful scarecrows.

We also let her pick a fresh snow pea of a vine and taste it’s crispy freshness, and Ayla bent down with eager curiosity to inspect strawberries and peer at ripening tomatoes.

The highlight of the adventure though was showing Ayla little lady beetles for the first time.

Lady beetles have special meaning for Hubby and I, and it was precious to see how gentle and appreciative Ayla was of the tiny red insects.

Ayla was even brave enough to let the lady beetles run along her open palm, resisting a certain urge to close her fists and squish.

Hours later when we were at home getting ready for bed, I sat down with Ayla to read her touchy-geeky bunny book.

I hadn’t realised before that each page of the book had a hidden lady beetle and now knowing that Ayla knew what a lady beetle was I asked her if she could see one.

After a couple of moments studying the page Ayla pointed, straight at the beetle. I tried again on the next page, and the page after that and got the same result every time.

After going through the book a couple of times Ayla even began saying “beetle” when she pointed to them. I was surprised and amazed and proud at my clever little girl.

Our nights out for dinner have changed.

Instead of looking for fancy restraunts with a certain sort of atmosphere, good food and cosy little nooks to relax in and chat, we now look for food outlets that are within 10km radius and provide kids club facilities.

We went out for dinner tonight for Hubby’s birthday that’s tomorrow, and we found ourselves at the local sports club.

We promptly tracked down the kids club and claimed a table right by the window, before ordering overpriced and undercooked meals that took far to long to arrive.

However, none of that mattered. As Hubby and I sat beside an empty high chair, we peered in through the window and watched our little girl play.

Ayla tried her best at making friends but the other children in the club were older, glued to the TV screen and the computer games so Ayla turned her attention to drawing on the blackboard walls with chalk.

As Ayla toddled about the kids club Hubby and I had plenty of time to chat, but instead we watched in awe at the gorgeous, smart little human we created and we decided that sports clubs with kids clubs might just be our kinda thing after all.

Ayla’s a little daredevil in the making!

We went to a sports club for tea with friends tonight where there was an outdoor playground for the kids.

All the other kids were bigger (of course) and older than Baby Ayla, and because they were hyped up on kids meals and ice cream the playground was chaotic and overwhelming.

It didn’t take long for Ayla to find the slide though, and while she was trying to climb up other kids were sliding down.

After a while Ayla worked out how the other kids were doing it, and decided to copy…

Ayla climbed up eight steps, then up another step to a platform about 1.6m high.

Ayla then toddled to the top of the slide, carefully held on to the sides and sat down, then pushed off and “wheeeee!” down the double-hump slide she went.

Ayla was SO happy with herself, screeching and dancing on the spot when she reached the bottom, then off she ran back to the steps for round two.

Over and over again Ayla went down the slide, unassisted. While there were two year olds who were scared to slide without their parents holding them, but not our Ayla…. !

When I picked Ayla up from day care this afternoon, the Day Care Mum was in tears.

She was crying because she’d just seen Ayla in pain, crying, struggling to do something all other kids take for granted.

She’d just witnessed the reason for the ongoing food diary, the gluten free dairy free diet, the appointments, the tests, the band-aids on her elbows, and she was horrified.

As awful as I felt for her, I was glad that the day care centre finally got to witness what Hubby and I have been experiencing on the weeknights and weekends; our beautiful baby girl in crying pain.

After a bit of investigation I found out that what had caused the Day Care Mum to cry was simply a tiny, tiny part of Ayla at her worst.

What the Day Care Mum saw today did not include Ayla’s cheeks being stained from hours of tears. She didn’t see the vomiting, the eyes rolling back in Ayla’s head or the moments of unconsciousness, all brought on by pain.

But still, the Day Care Mum was crying because what she had seen was enough and she couldn’t stand it. She stared at me in awe and asked me how I do it and I simply couldn’t answer.

It made me look at Ayla’s situation a little differently because I didn’t realise that my strength might be diluting the severity of Ayla’s illness…. Because I am strong and logical, systematic and controlled, maybe I haven’t allowed myself to panic, which in turn drives outcry and action.

So of course, the guilt crept back in and the worry amplified and I found myself back at square one; questioning the doctors and their dismissive solutions for Ayla’s symptoms, but not the cause, and querying the dieticians and their long drawn-out processes of elimination.

I need answers. And I need them now.

Saturday, 9 August 2014: One Year, One Hundred and Thirty One Days Old.

What th’?! I hear you say, but don’t worry, I mean that Ayla learned to run downhill this after while our little family were out in the yard pottering around.

I has completely forgotten how fun it was to run downhill as a kid until I saw Ayla do it by accident, pause, laugh, and go straight back to the top to try it again… This time whilst saying “yay” and holding her arms in the air.

Mind you, I shouldn’t really call it a hill, it’s more like a mound of dirt with grass on it, tucked away in a back corner of the yard.

But to Ayla it probably felt like Everest as her little legs got faster with each step closer to the bottom they took her and her little belly poked out front as if gravity was calling her.

Hubby improvised a bath for Ayla this evening and it worked a treat!

This house has no bath ( yet, just wait ’til the renos are finished!) so since outgrowing her baby bath Ayla has had to have showers.

Occasionally I’ve blocked the shower drain with a face washer or my foot to try and give Ayla some water to splash in, but this evening Hubby used a nonslip bath mat and voila! Instant bath.

Ayla sat in the “bath” for ages. I put bubbles in and gave her some extra toys and Ayla played and splashed for well over half an hour.

Ayla also learned that bath bubbles make noise, so she started rubbing them into her ears and then giggling at the sound of the popping and crackling.

It was cute, fun and a definite redo; Ayla loved it and mummy and daddy get some time to sit and chat and watch our beautiful little munchkin learn and play. 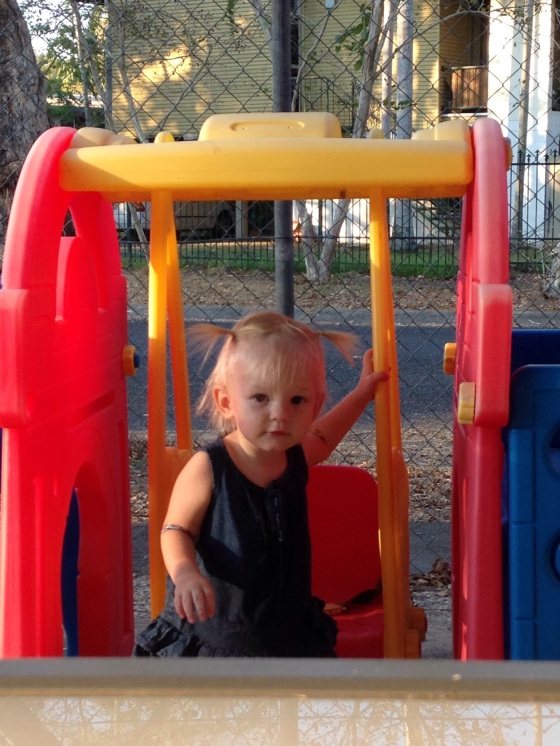 Ayla learned how to blink today!!

It was funny because I could actually see her having to use her brain to make her eyelids move.

It was also cute to watch how slowly Ayla blinks, as if she’s trying to watch what happens while it’s happening.

Ayla’s little face looks strained while she blinks, but happy because it’s an awesome new trick. 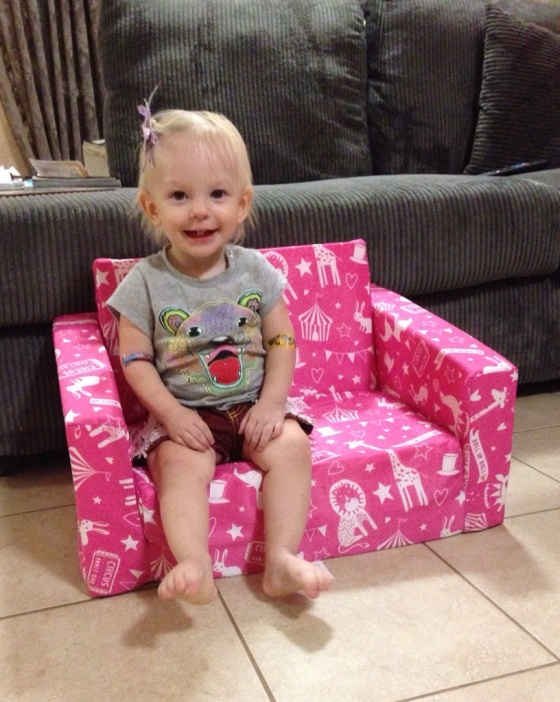 Ayla became a human pincushion today when we took her to get blood tests… Twice.

Ayla had tests done about 10 days ago but she didn’t seem to recognise the situation when Hubby and I took her in this morning.

Ayla was all smiles and oblivion as the needle went in, but her little face quickly twisted in pain and devastation while she sat on Daddy’s lap surrounded by nurses.

The attempt was unsuccessful and we were told to come back later to try again, after making sure Ayla had had plenty of food to eat and water to drink.

So the afternoon rolled around and I was anxious about having to put my baby girl through that again.

We arrived and Ayla remembered her earlier experience, reaching out to me and crying whenever a nurse came to talk to her.

The nurses tried again, unsuccessfully, to find the vein, jabbing my darling girl in her other arm this time, the one that was still bruised from a week and a half ago.

Hubby and I called it quits, deciding it wasn’t worth a third attempt, at least for a while. We felt so guilty and sad for Baby Ayla that we did what all guilty parents do; we spoiled her.

Ayla loves the little lounges at her day care centre, always showing me how she can sit or lie on one all by herself. So in our guilt Hubby and I bought her one, and it’s brightened up our day for all of us.

Ayla LOVES it. She squealed when she walked in the door tonight and saw it, assumably forgetting that she had it.

She spent the next half an hour climbing, lying and sitting all over it, getting toys and sitting them beside her, and throwing other toys down on it to watch them bounce.

I know Ayla probably doesn’t realise that the pretty pink couch is in recognition of her bravery, resilience and forgiveness, but Hubby and I do.

Ayla’s learned to cover her ears and shout!

It’s hilarious. Ayla will suddenly slam both hands against each side of her head, cover her ears and yell “ya ya ya” before cracking up into a giggle.

I have no idea where she learned it, maybe from wearing ear muffs while we using power tools on our renovations, but this morning Ayla did it out of the blue.

Ayla’s had a bit of an ear thing going for a while now.

A few months ago I noticed her pinching the tops of her ears with her fingers so I went in to give them a rub for her.

Just like The Dog does, Ayla’s head melted into my hand, her eyes rolled back in her head and she let out a soft groan.

Ever since then I’ve notice Ayla pinch at her ears when she’s tired, upset or a bit out of sorts, and if she’s in need of a little settling I’ll rub her ears for her.

But the comfort Ayla gets from that was nothing like the laughs she got from hearing her voice change when she covered her ears the morning, then again tonight at tea.

An Ayla A Day
Blog at WordPress.com.