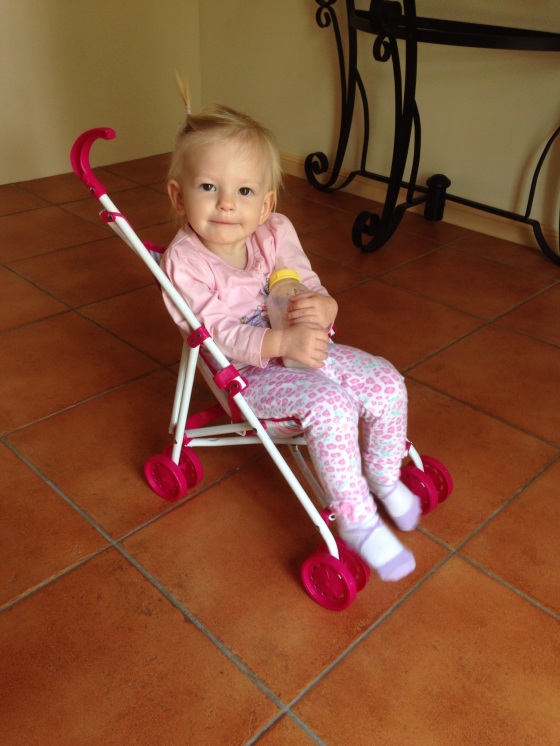 Tuesday, 9 September 2014; One Year, One Hundred and Sixty One Days Old

Despite all her health issues, I am so undeiably and completely grateful Ayla is a happy, bright, clever little sausage.

Today, Ayla decided out of the blue that she could high-five herself. It came after she high-fived me, then high-fived my Mum, and of course becuase she didn’t want to miss out herself so Ayla held her left hand out flat in front of her then slapped down on it with her right.

Ayla also discovered that she can fit in the dolls pram I bought her the other day. This now means that Ayla’s refuses to allow anything else to sit in the pram except herself, and means I find myself hunched over, pushing her around the house for the half the day.

And, Ayla learned a new word; pretty. I put a headband on her this morning and told her to look in the mirror. She walked over to it, swayed and waved her hands and then said “pret-ty”. It was adorable.

Finally, and certainly not least. Ayla can now also pick out a picture in a book and say what it is. Particularly turtles. And dogs. Even if a new ad comes on TV with something Ayla knows how to say, she says it. Ayla’s vocabularly and comprehension is growing every minute and its completely amazing.

She’s such a clever sausage.