It was back to reality for my little family today, and Ayla didn’t want a bar of it.

When I dropped her at day care this morning, Ayla cried and clasped onto me and wouldn’t let me go. It was the first time Ayla had reacted like that since her first few weeks of day care and it was heartbreaking.

I knew that Ayla loved our week away, having the attention of both her Daddy and I for a whole seven days, but I didn’t realise how much it actually meant to her.

Ayla’s reaction shone a spotlight on the importance of family first, focusing on our own little nucleus instead of all the day-to-day living activities that often steal our attention.

Going back to work (and life) was also a bit of a downer for me. Not because I don’t love my job or because I’m not grateful for the wonderful life we have, but because with life comes distraction and I know what an impact this can have on Ayla.

I don’t know what the answer is… The answer to life-balance.

To keep a roof over our heads and food on the table, to have the money to afford a good education for Ayla, and still finding funds for the things we enjoy means both of us must work.

It also means we have to dedicate our spare time to renovating and property investing, goodness knows our superannuation won’t be much, and it takes time and commitment to continue building our skills so we can maintain our careers.

But, it all comes at such a cost!

Seeing Ayla in tears this morning brought back my desire to throw all our plans and goals and dreams away and head off on an extended family “holiday”; to not worry at all about the future, or Ayla’s future, and think only of the now.

But while it sounds like a wonderful idea and one that could even be achievable, it’s a risky whim that doesn’t address the real issue, it still doesn’t create balance. 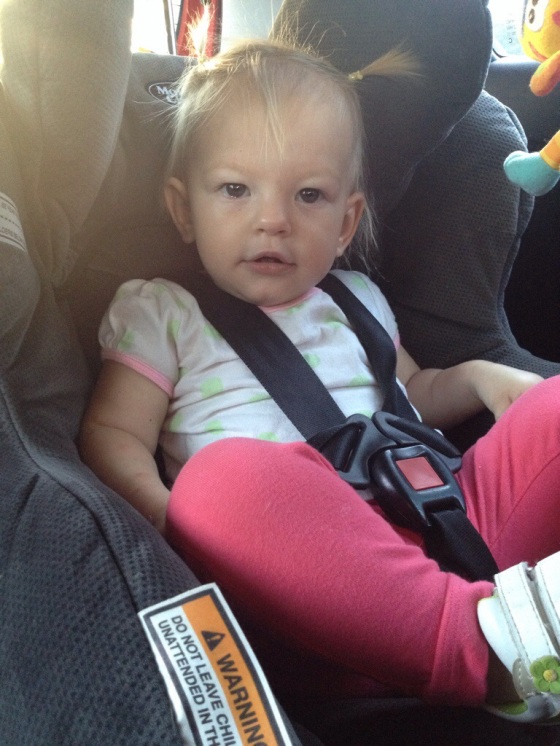 Although I’d been caught up late at work I still had to ring our designer to confirm a few things.

So, I made the call on my mobile on the way home and completely forgot to turn off toward Ayla’s day care.

It wasn’t until after the call had wrapped up and I was only a minute or so from home that I realised!

I think part of the reason I forgot was because in the back of my mind I knew Hubby was home earlier than usual, even though we’d discussed Ayla’s pick up just an hour earlier.

Anyway, I raced through the back streets and pulled up at day care, feeling guilty and a little but ashamed.

I felt guilty because I know most parents probably forget their kid at some point but I didn’t think it would happen to me so soon!

And I was ashamed because I let work take over my brain to the point I forgot to pick up my darling Baby Ayla.

It could have been worse I guess, I arrived before 5pm and Ayla was really none the wiser… If anything she was happier than usual to see me!

I picked Ayla up today to discover piggy tails in her hair!!

Oh my gosh, it was adorable, and I think it might become Ayla’s customary ‘do.

It made me realise that day care is definitely shaping the person Ayla is becoming.

It’s a good thing, I think. If it weren’t for day care I probably wouldn’t have thought to try a pony tail, let alone piggy tails!

I guess sending Ayla today care is particularly useful because I have no idea or experience with anything child related.

For example I probably wouldn’t have thought to try finger painting with Ayla but apparently she loves it!

As good as day care is though, there’s a part of me, deep down, that is sad I’m not discovering these things on my own.

I would love to have seen Ayla’s face the first time she put her hands in a tub of paint, and it would have been so exciting to realise her hair was finally long enough to style!

But I guess it’s all part and parcel of modern day life. So few people are in a position to stay at home with their kids, and I have to remind myself how lucky I was to have a whole year at home. 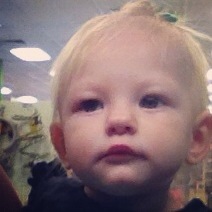 Ayla must have been watching out the window this morning when I pulled up in the car park to drop her off.

I shut down the car and turned to look at Ayla and explain, like I always do, that it was time for her to go to school, but before a single word could escape my moutH Ayla started waving and saying “bub-bye”!

“Bub-bye” is definitely Ayla’s favourite word at the moment, probably because it’s accompanied by the distinct action of waving, but I couldn’t help feeling obsolete when she said it to me this morning.

Of course I’m glad that Ayla loves her day care so much, and it gives me so much peace of mind to know she’s being care for by people she looks forward to seeing each morning, but still the pang of sadness reached into my heart.

To make matters worse, when we got in to day care Ayla immediately reached for one of the carers, and no sooner was Ayla on the day care mums lap was she again waving “bub-bye” to me and blowing kisses.

My little girl is certainly growing up and I guess I should be grateful for parting acknowledgement…. Goodness knows when Ayla’s four I probably won’t get a glance back, and when she’s fourteen a grunt will be a miracle! 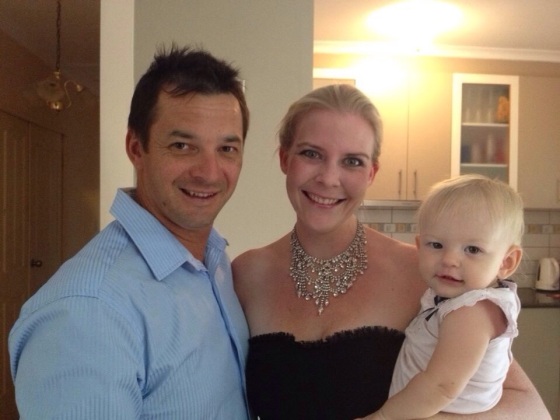 Our house is full of winners today!!

Hubby won his charity boxing fight, our babysitter won our trust and Baby Ayla won yet another gold star from her Mum and Dad.

It was fantastic to have a stress- free adult night out with our friends, even though it didn’t quite start out like that!

The babysitter turned up 5 mins early and we took her through Ayla’s dinner, her bedtime routine and most importantly, how to use the TV.

We all moved out the front to wait for a taxi we’d booked the day before but it never came.

As the clocked ticked closer and closer to the event starting time and Hubby got more and more anxious, we made nearly ten calls to the company who kept sending us new taxis, to no avail.

After half an hour of waiting we asked the babysitter to drive us and within seconds we were all bundled into my little hatch heading to the fight.

We arrived and jumped out of the car, gave Ayla a kiss and told her to be good then waved as the babysitter drove off in my car with our baby in the back!

I figured if I could do that then I had nothing much else to worry about for the night, and I was right!!

The babysitter text as soon she got back to our house, and then again when Ayla went to sleep around 8pm, just like normal.

Knowing that Ayla was safe at home, tucked up in bed, meant I was free to cheer Hubby on til I was hoarse!

We came home around 11.30pm and Ayla had just woken up. We found her cuddling into the babysitter on the couch, which meant we got to give her proper goodnight kisses and cuddles.

It was a great night. 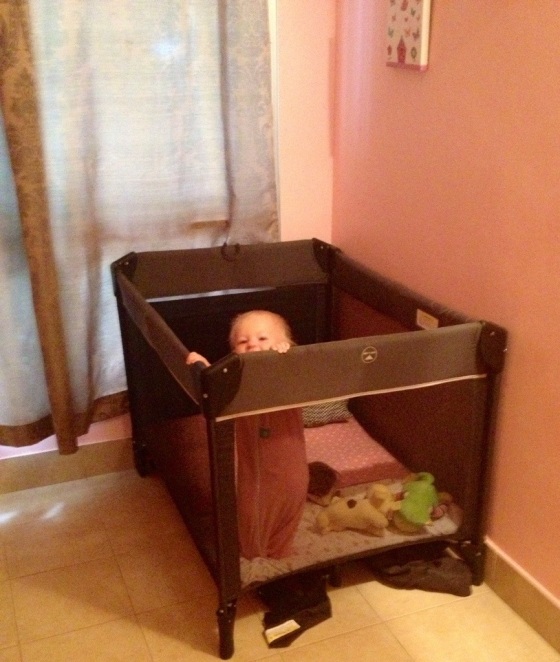 I’m starting to understand what people meant when they said having a “mobile” baby would come with a whole bunch of new challenges.

I thought they just meant the mess and the broken trinkets – I had no idea that there was more to it than that – but now Ayla’s crawling, almost walking, she’s become my constant shadow.

On the one hand I love having Ayla follow me around the house, seeing her little face appear in a doorway or feeling her little hands grab hold of my legs is so precious it makes my heart want to burst.

But on the other hand it means simple tasks such as mopping the floor are now wrought with danger… I never would have thought bucket of hot water and a soapy mop head could become such a worrisome combination!

I think it’s because although Ayla’s always been interested in what’s going on, she’s now able to actually get involved in it.

If I’m cooking in the kitchen Ayla’s at my feet, or standing up holding onto my knees, or getting stuck in the fridge.

If I go outside to check the mail Ayla sits banging at the front door from the inside, unknowingly blocking my reentry.

If I’m folding a never ending pile washing Ayla is faithfully by my side systematically unfolding it, crushing it, and throwing it on the floor piece by piece.

I never thought I could be so conflicted!

The slightly anxious perfectionist in me wants to scream at the chaos while the mother in me just wants to smile and laugh.

I know which of my sides has the better argument – the mother, of course – but I still struggle with trying to find the right balance and I suppose it’ll be something I’ll never quite get the hang of.

For now though, I just keep reminding myself that there’s always tomorrow and hope for the best that Ayla’s two hour nap doesn’t suddenly become a 20 minute recharge that leaves me caught out between a hungry baby, a half-cooked batch of muffins and a storm threatening to drench my nearly-dry sheets.

Ayla seems to be getting a better daytime nap routine too; she goes down for a couple of hours around 11am, and then again around 4.30pm.

I’ve been hanging for this routine to take shape for ages and I’m really hoping it lasts!

Even if I can count on a couple of spare hours to myself each day, it will make a world of difference to the house and paper work that’s piling up!