Hubby improvised a bath for Ayla this evening and it worked a treat!

This house has no bath ( yet, just wait ’til the renos are finished!) so since outgrowing her baby bath Ayla has had to have showers.

Occasionally I’ve blocked the shower drain with a face washer or my foot to try and give Ayla some water to splash in, but this evening Hubby used a nonslip bath mat and voila! Instant bath.

Ayla sat in the “bath” for ages. I put bubbles in and gave her some extra toys and Ayla played and splashed for well over half an hour.

Ayla also learned that bath bubbles make noise, so she started rubbing them into her ears and then giggling at the sound of the popping and crackling.

It was cute, fun and a definite redo; Ayla loved it and mummy and daddy get some time to sit and chat and watch our beautiful little munchkin learn and play.

Ayla and I had a lovely morning today, hanging out like a couple of best friends with not a care in the world.

Hubby had left early to go fishing, so when Ayla and I woke up we had the house to ourselves and a good few hours to fill in.

I had a craving for crepes and before I could think twice and talk myself out of it I dressed Ayla in one of her Christmas dresses from Grandad and we set off for the markets.

The markets were no where near as busy as usual so Ayla and I were able to kick back untroubled in the shade with a coffee and our breakfasts and watch the world go by.

When we got home I was keen to pot a new plant I’d bought (my first ever self-purchased market plant!) and Ayla was keen to finish off her prawn toast!

While I pottered around in the garden Ayla played happily by my side, sharing her toast with The Dog, inspecting fallen sticks, and munching on dead leaves until she was covered from head to toe in dirt, dust and sesame seeds.

The day was starting to heat up so to cool Ayla off and clean her up I set up her baby bath under the patio and let her splash and play for nearly an hour while I relaxed beside her and read the paper; it was relaxing, wholesome and fulfilling, and something I haven’t done in a very long time.

Baby Ayla playing with a hose for the first time!

This video is a little long, but the cutest bit is at the very end 🙂

There’s so many things I could blog about today!

I could tell you about how Ayla drew her first blood today – a paper cut on her middle finger while we were reading Snugglepot and Cuddlepie. She didn’t cry.

Or, I could tell you about how the baby bath has been our saving grace this weekend, or how this afternoon Ayla came face-to-face with her biggest fish yet. Good job Daddy.

Or, I could tell you about how Ayla went to her first theatre show tonight. It was a cabaret/burlesque/variety type thing and, despite the loud noises and cheers and the after 7 time slot, the only noise Ayla made the whole time was a modest little giggle at her Aunty Kerri.

But, if I was to choose one thing to blog about today it would be how Ayla took her first (assisted) steps today. About eight of them.

Admittedly, I was holding her hands but for the first time ever Ayla put one chubby little foot in front of the other and walked towards me.

I was so proud! I was so shocked! I didn’t know whether to laugh or cry. But I could hardly believe my eyes. I know it’s only a taste of what’s to come but it was amazing all the same.

We took a couple of friends out to the shack this weekend and given the stifling Build Up weather and Ayla’s rash I decided to pack the baby bath.

Ayla is now big enough to sit up in the bath herself, and she’s at the age where simple toys provide hours of fun – put the two together and we have one very happy little girl.

It meant I could let Ayla get as dirty as she wanted; I didn’t have to worry about giving her food to play with, or about how much sand landed on her when The Dog walk past wagging his tail.

I also didn’t have to worry about her overheating or about picking her up for a cuddle if I was dirty.

In less than twenty-four hours, Ayla was in the bath about 5 times. She sat there, quietly playing and splashing for ages and it was so wonderful to watch her.

While Ayla’s been sick we’ve been forced to abandon the “bush squirt” and set up the baby bath inside again.

This video is of a “sick” Ayla (she doesn’t look sick!) discovering bath bubbles for the first time. 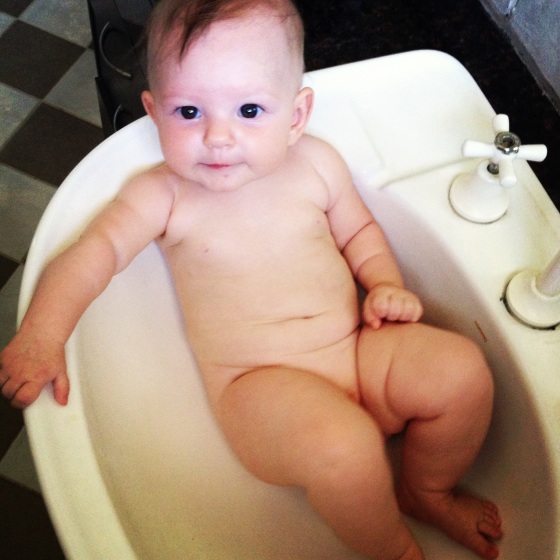 We’ve discovered that Ayla fits quite comfortably in our bathroom sink.

It’s a handy discovery because we have virtually no water pressure in the shower, no bathtub in the house and the baby bath is now too small and too awkward.

So until now bath time for Ayla has been less than ideal, more so for us than her.

Lately we’ve even taken to showering in our outdoor/poolside shower. It only has a cold setting but now that the weather’s warmer it’s actually a good option.

Except that we have two high-set houses across the street from us which both have balconies in clear view of our “bush squirt”.

So this is why the bathroom sink is a welcome variation… Not to mention that its handy for keeping Ayla secure while I’m putting on my face and doing my hair!