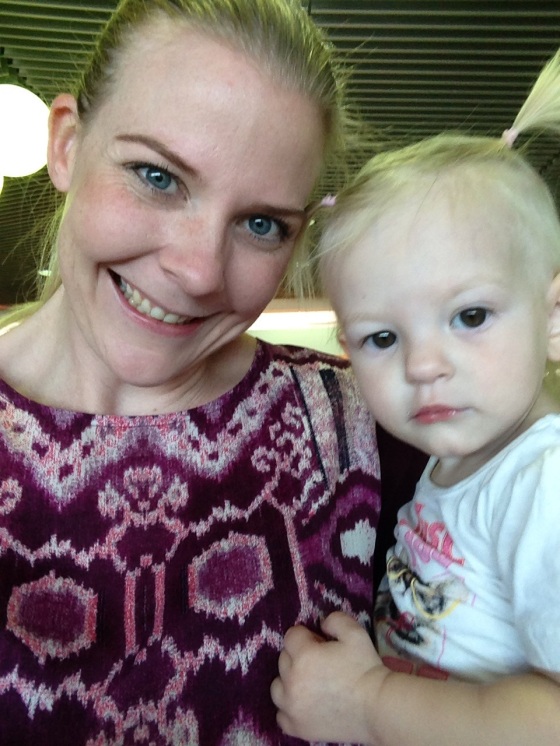 Friday, 19 September 2014: One Year, One Hundred and Seventy One Days Old

Ayla and I headed home today to see Daddy, The Dog, Cat Cat and the “Ju-jus” (chook-chooks!)

Ayla was so excited to be home, running over to Daddy as soon as she saw him at the airport and gluing herself to his side. Then, when we pulled in the driveway at home and Ayla saw The Dog she gave him the biggest smile and a pat, and later when she saw our cat lounging under the outdoor setting she squealed Cat Cat, pointed and ran on the spot in excitement.

The cutest was seeing Ayla go inside and rediscover all her toys! Ayla ran straight to her little piano, pulled out the stool and bashed on the keys for a few minutes, then toddled over to her toybox and touched everything in her reach. Best of all though was when Ayla layed eyes on her little couch – her most very favourite thing of all! Ayla screeched with delight and plonked herself down, grinning from ear to ear as she looked from me to Hubby and back again.

Ayla excitement about being home meant that an afternoon nap was completely out of the question, so instead she joined Hubby and I out in the yard as we caught up on some gardening. After three weeks of beautiful, crisp spring weather it didn’t take long for home’s 36 degree heat and build-up humidity to have an affect on Ayla, flushing her cheeks pinky-red and putting tiny beads of baby sweat on her top lip.

When bedtime finally rolled around Ayla was pooped but happy, and I was looking forward to a night in my own bed! It felt like we’d accomplished the first leg of an endurance marathon and I relished the chance for some routine and normalcy, even if it’s just for a couple of weeks before returning interstate for the next lot of tests. Thankfully though, Ayla has taken to her prescription formula easily and seems to love it, so we can at least rest assured we’re actually doing something that might help her in the meantime.

We took a couple of friends out to the shack this weekend and given the stifling Build Up weather and Ayla’s rash I decided to pack the baby bath.

Ayla is now big enough to sit up in the bath herself, and she’s at the age where simple toys provide hours of fun – put the two together and we have one very happy little girl.

It meant I could let Ayla get as dirty as she wanted; I didn’t have to worry about giving her food to play with, or about how much sand landed on her when The Dog walk past wagging his tail.

I also didn’t have to worry about her overheating or about picking her up for a cuddle if I was dirty.

In less than twenty-four hours, Ayla was in the bath about 5 times. She sat there, quietly playing and splashing for ages and it was so wonderful to watch her. 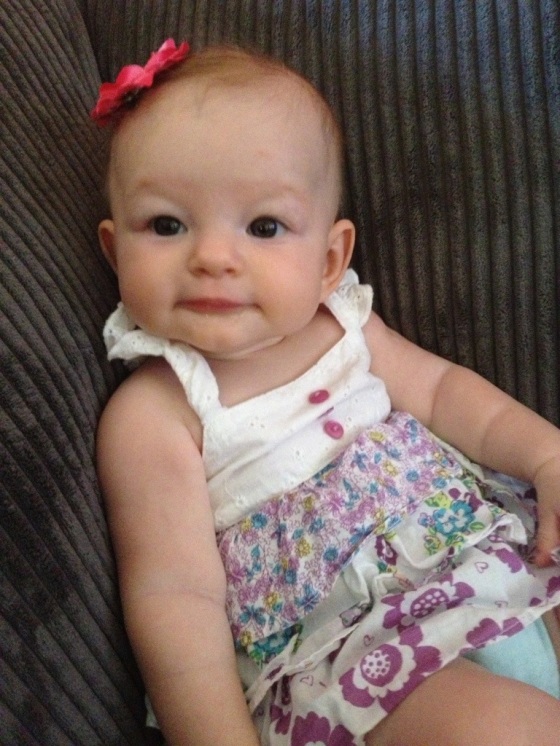 Ayla certainly is a tropical baby!

Because we’ve been renovating we’ve had to rely on only a fan to keep Ayla cool at night, but yesterday we had new airconditioners installed throughout the house.

But this means we now face the dilemma of “what is optimum temperature” for Ayla to sleep in.

After last nights efforts where her room was 25 degrees and Ayla woke every three hours with a cold face, tonight we’re going to try 27.

It feels weird to set a cooling device to 27 degrees, but when the standard temperature is 31 I guess it’s not that crazy.

Poor Baby Ayla has had nappy rash the last couple of days and it seems to be getting worse.

Ayla doesn’t seem too upset by the actual rash, but she has been a little irritable when her nappy’s on.

So to ease the discomfort and try to get the rash under control Ayla’s spent most of the last few days naked.

Ayla loves naked time! She wriggles around on her play mat, kicking at toys, rolling and twisting for what seems like hours.

I feel terrible when naked time is over though (which is usually when I think I’ve pushed my luck in dodging Number Twos) and I have to wrap her sore little bottom back up in a plasticky nappy.

We’re doing our best to fix the rash but I guess it’ one of those things that comes with living in the tropics. I really hope she gets well soon though, the “Build Up” season is nearly here!