Ayla might not be able to walk properly yet, but she knows how to kick a ball!

I don’t know where Ayla learned to kick except from maybe watching a bit of AFL on TV, but today Ayla proved to Hubby and I that she certainly has hand eye coordination.

The ball kicking goes with Ayla’s ability to throw a ball, over arm, in any direction she chooses; both being skills that apparently only 50% of children have mastered by the time they reach 21 months!!

Does this mean Ayla’s gifted? Or is it just one of those skills she developed ahead of average time frames.

Not surprisingly, Hubby is ecstatic. As a natural, ambidextrous sports person he can hardly wait to play a bit of touch footy with Ayla in the back yard.

While that will have to wait until Ayla walks, and then runs, for now we’ll have to be content to bask in her greatness and nurture her (potential) talent!

Here it is! A clip of Ayla’s first few steps.

Ayla and I had our first game of chasey today.

It was adorable and painful; I don’t know how Ayla’s little knees handle the tiles all day long!

It started off with us crawling around on the floor chasing after one of Ayla’s toys and it wasn’t long before the game escalated.

Ayla was like a bundle of pure happiness, squealing and screeching at the top of her lungs each time she took off on all fours, as if she were a knight screaming “charge!” just moments before her horse rears and bolts.

It cracked me up how excited Ayla was, her little hands and knees were moving at warp speed but regardless of how quickly or loudly they slapped the tiles Ayla wasn’t moving any faster.

It was as if Ayla simply couldn’t control the enegery and hype inside herself and her joy was definitely contagious.

After a little while, when my knees couldn’t handle the pressure any more, Ayla and I collapsed together in a big bear hug on the floor where we covered each other in wet slobbery kisses and tickles. Bliss.

I’ve been researching ways to get a baby to nap when they’ve just learned how to crawl/stand/sit, and the general consensus seems to be; “good luck”!

Thankfully Ayla’s night time sleeps are starting to improve, slowly and irregularly mind you, but getting Ayla to nap during the day has become a nightmare.

They say it’s because Ayla’s just learned so many awesome new skills she’s simply hyped up and wants to keep using them all the time.

So I guess it could be akin to and adult discovering a cure for cancer but being told to go to bed… Yeah right!

I think there might also be a knack to the whole “feeding solids” thing that could be impacting on Ayla’s nap times.

Now that Ayla is starting to eat more food I find myself worrying if she’s getting enough and wondering if she can’t sleep because she’s still hungry.

At the moment I just keep giving Ayla different types of food until I start to see more of it on the floor than in her mouth, but how do I know if Ayla’s throwing the food away because she’s full or because she doesn’t like it?

I guess it’s all just another matter of trial and error, and of keeping fingers crossed, until Ayla finally gives up the fight and gets back into a rhythm again.

The name says it all… Ayla’s off and racing now!

When I made the call and said Ayla would be “properly” mobile within a fortnight, I didn’t expect it to be so soon!

Ayla is so good at crawling now that I’m already starting to experience the “oh crap, she’s too quiet” moments, and my privacy is well and truly out the window.

Hubby also noticed the impact of Ayla’s mobility when she crawled her way from one end of the house to the other today and set up camp in front of the fishing rod rack in our bedroom.

It must have only been seconds but Ayla somehow managed to dig out a box of hooks and even get one out… O.M.G. What have we got ourselves in to!?

I also found Ayla standing in front of the vanity draws in the bathroom this morning. She had one draw open fully and was happily pulling out and throwing everything she could get her hands on.

And talk about getting ready to go out! It used to only take me about 15 minutes to get out of the house with Ayla, but today it took nearly an hour; turns out it’s hard work catching, cleaning and clothing a baby on the go!

Ayla is developing so fast! In just the last 24 hours alone she’s made so many new developments it’s hard to pick just one to blog about.

Ayla officially crawled today. Not the strange bulldozing kind of crawl she’s been doing for the past week, but a proper crawl on her hands and knees.

Ayla didn’t crawl far mind you, probably just a couple of metres or so before collapsing on her belly, but she kept it up throughout the day which was enough for me to make a note of it in her baby book: First crawled… Wednesday 22 January 2014.

But then it was like there was no stopping her!

Every time I tried to put Ayla down for a nap she crawled around in her cot, grabbing at her toys and finding any distraction available to prevent sleep from happening.

It also only took a few attempts for Ayla to work out how to pull herself up to standing from all fours, and because her favourite place to do this is in her cot, now the bassinet insert has GOT to go.

I think the assortment of stuffed toys that have surrounded Ayla as she dreams since she was born are going to have to make themselves scarce pretty soon too.

It’s a shame, but during one attempted nap time routine today I poked my head in to see if Ayla was asleep and found her sitting upright with her toys surrounding her as if they were sharing a tea party!

I also saw Ayla push herself up into what looked like the downward dog yoga position this afternoon.

I nearly jumped out of my skin because it looked like Ayla was about to stand upright and walk off! Thankfully though, while I watched, Ayla sat her little bottom back down on the tiles and turned her attention to something else.

Ayla’s also making big developments in the pool. Although I don’t actually let her go, Ayla seems to have the basic motion of swimming sorted out, and she certainly has no fear of diving under the water…. Today she even seemed to deliberately hold her breath and stick her face in!

So as you can see, things are pretty full on here at the moment! I am excited, overwhelmed and a little anxious but I can’t wait to see what tomorrow will bring… I can almost see Ayla’s brain growing bigger and stronger every day, I just hope I can keep up!

This is a clip of Ayla bulldozing her way to me for a cuddle.

You can see how awkward it is but I guess it gets her from A to B and that’s what counts! 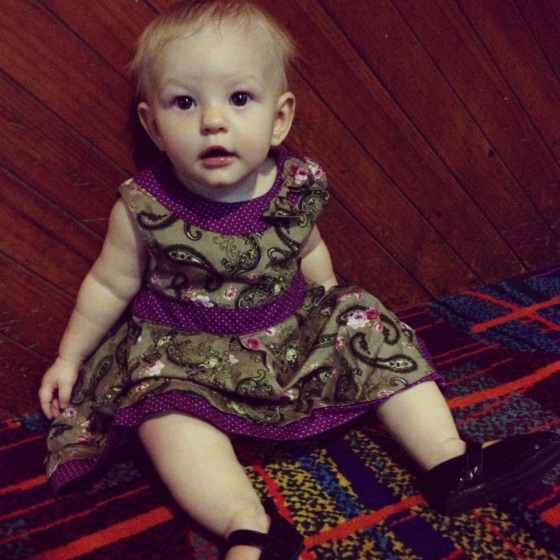 Ayla is so close to crawling!

She’s so close in fact, that I can no longer claim Ayla to be “non-mobile” because she’s now clearly managing to get to places she shouldn’t be, and grab hold of things she shouldn’t get.

I’m not sure if maybe it’s the freedom of her walker that’s driven Ayla to find new ways of adventuring, or if it’s just a natural progression spurred on by nothing more than time, but if I were to make the call I’d say that Ayla will be completely, and unassistedly, on the go within a fortnight.

At the moment Ayla’s crawl is more like bulldozing; instead of using her knees Ayla digs in her toes and stiffens her legs with such force that her arms collapse and she face plants, like a bulldozer bucket driving into the dirt.

But after each face plant Ayla pushes herself back up onto her hands and knees and repeats the process, over and over like an awkward uncoordinated caterpillar.

Although Ayla’s newfound way of traveling takes lots of time and plenty of effort, she has been managing to travel fair distances before succeeding, or surrendering, in her journey. 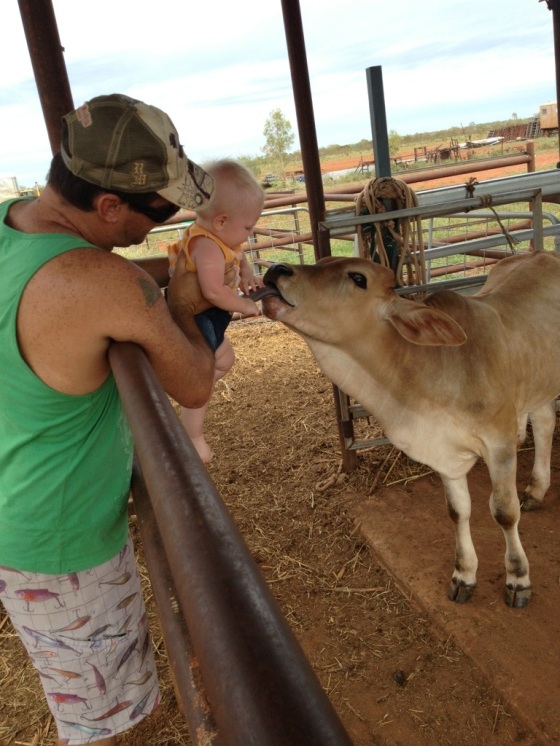 Ayla is the only non-mobile kid out here.

She is also one of the youngest with the nearest-aged cousins being two girls aged 7 months (Tilly) and 10 months (Jazzy) respectively.

Tilly is happily crawling around, and Jazzy has nailed the crawling stage and is now starting to take her first steps.

Although I know I’m being silly, I can’t help but worry about Ayla and feel sad for her sitting all by herself as her cousins scoot past.

I know that the biggest difference is having other kids to watch and learn from, and with Ayla being our first baby she hasn’t had to get or do anything herself.

Each day we’re out here though, I can see Ayla starting to work it out.

It’s clear Ayla knows exactly what she WANTS to do, but she just hasn’t figured out HOW to do it yet, although I’m sure it won’t take long!

As much as I feel sad and worried, the thought of Ayla being up and mobile freaks me out!

I don’t want Ayla to grow up any faster than she needs to and I’m loving my little, quiet, stationary baby just as she is. 🙂

Other things that happened today:

– The three of us visited the cemetery on the hill behind the homestead where Hubby’s Mums ashes, and his Grandma, are buried. It felt a bit strange because we feel their presence with us always but it was important we took Ayla to “see” her Grandma and Great Grandma.

– Ayla had her feet licked by the long, winding tail of a calf this morning. She thought it was hilarious at first until the calfs course, scratchy tongue started wrapping its way around her leg!

– A massive storm cell hit without warning this afternoon, flooding the low-lying areas with a 44mm downpour and blowing a fierce gale that picked up a massive trampoline and flung it into the sky like confetti.