My Mum (who Ayla and I are staying with) and I had to take Ayla to the Emergency Department last night (Friday) suffering another episode severe impaction.

While this situation was not unusual for Ayla and something Hubby and I have witnessed many times over the past four months, this was the first time we have actually had a team of doctors recognise that what we are dealing with is by no means “normal”, and understand that no amount of probiotics, prune juice, dietary changes or laxatives are going to fix it.

I won’t go into the gory details of what happened, but essentially the doctors at the ED will write a report to our Gastro Paed explaining what they witnessed and suggest he conducted some additional testing when Ayla has her procedure on Friday.

Ayla list of diagnoses is increasing by the day, but unfortunately there’s still no one answer to link them all together. But we’re getting closer.

I am overwhelmed by the level of care we have been receiving here, interstate. The doctors and nurses are proactive, caring, diligent and committed to their patients, or at least to poor Baby Ayla. I am astonished by the huge variation between the hostpials here and the hospitals in our home city, and I am so very glad we came down here, I only wish we’d done it sooner. 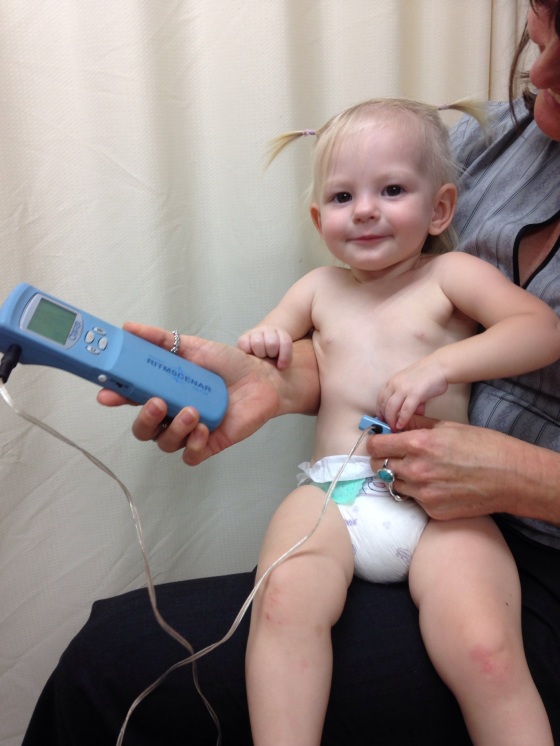 Ayla and I had a number of appointments today that, I think, have turned out to be promising.

We met with a gastroenterological paediatrician who has booked Ayla in for an endoscopy, some kind of colonoscopy and bowel biopsies next Friday. He’s also requested new stool samples to test for a greater range of parasites, and will conduct some further blood tests while Ayla is under anaesthetic.

He doesn’t necessarily feel they will provide us with a cause, but it will certainly rule out any ongoing medical conditions that are causing Ayla’s problems. He is also referring us to an endocrinologist who can investigate Ayla’s growth concerns.

We also met with an Integrated Medicine doctor who’s prescribed a number of supplements to increase Ayla’s appetite, encourage better bowel function and replace essential microflora that’s missing from her gut. This activity will accompany the already prescribed baby biotics, bile salts and enzyme replacements by our dietician, and we’ll be able to get started on them almost straight away.

Thirdly, Ayla underwent some “third generation tens” treatment today to try and increase the function of her nervous system and remove any blockages that could be impacting her bowel. I’d never heard of it before and I’m not 100% convinced in the science but I figured it couldn’t hurt so we did it anyway.

We’ve also been seeing a children’s chirpractor who said Ayla’s pelvis was extremely inflamed, and he’s been treating her L4 vertabrae that incidently pushes on the nerves that go to the bowel. Don’t know if it’s working or will have an impact but it makes sense that we’d do what we can to address this as an easy fix.

So, we still don’t have answers but I feel like we’re finally getting some relevant care and suitable attention. The gastro paed was especially exciting as he was able to categorically rule out a couple of my concerns and he was the first doctor who I actually feel wanted to do something, at least to put our mind at ease.

We still have a decent road ahead but I’m finally starting to feel like we’re on the right path.

Ayla’s been having tummy problems lately, along with a few other things I won’t go into here, and in order to rectify the situation we’ve been told to eliminate all gluten and dairy from her diet for at least one month until the exact cause can be identified and treated.

It’s going to be a tough month (what on earth do you feed a GFCF child?!) but Hubby and I feel very supported by Ayla’s day care centre, our friends and family.

Ayla herself seems unfazed. We’re putting a lot more fat into her diet too at this stage so she’s stoked, and Ayla sucked back her almond milk bottle tonight like a marathon runner sucks in air!

As we know, motherhood is full of ups and downs and diversions, and this blog is about sharing that; the good and the not so good, so stay tuned!