Ayla became a human pincushion today when we took her to get blood tests… Twice.

Ayla had tests done about 10 days ago but she didn’t seem to recognise the situation when Hubby and I took her in this morning.

Ayla was all smiles and oblivion as the needle went in, but her little face quickly twisted in pain and devastation while she sat on Daddy’s lap surrounded by nurses.

The attempt was unsuccessful and we were told to come back later to try again, after making sure Ayla had had plenty of food to eat and water to drink.

So the afternoon rolled around and I was anxious about having to put my baby girl through that again.

We arrived and Ayla remembered her earlier experience, reaching out to me and crying whenever a nurse came to talk to her.

The nurses tried again, unsuccessfully, to find the vein, jabbing my darling girl in her other arm this time, the one that was still bruised from a week and a half ago.

Hubby and I called it quits, deciding it wasn’t worth a third attempt, at least for a while. We felt so guilty and sad for Baby Ayla that we did what all guilty parents do; we spoiled her.

Ayla loves the little lounges at her day care centre, always showing me how she can sit or lie on one all by herself. So in our guilt Hubby and I bought her one, and it’s brightened up our day for all of us.

Ayla LOVES it. She squealed when she walked in the door tonight and saw it, assumably forgetting that she had it.

She spent the next half an hour climbing, lying and sitting all over it, getting toys and sitting them beside her, and throwing other toys down on it to watch them bounce.

I know Ayla probably doesn’t realise that the pretty pink couch is in recognition of her bravery, resilience and forgiveness, but Hubby and I do. 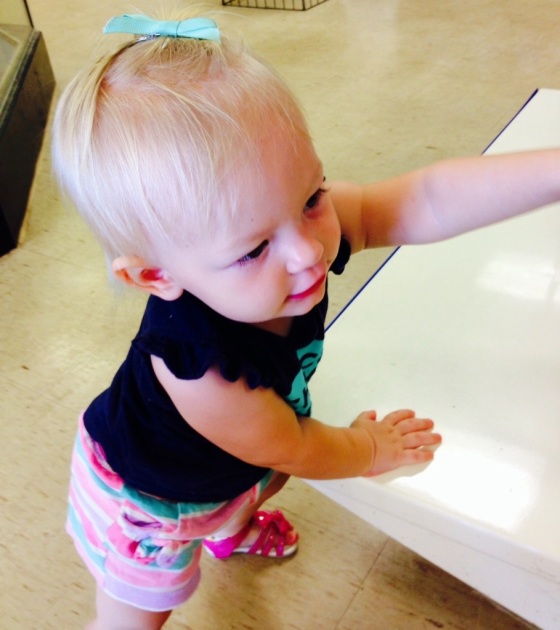 Today is the first day since going back to work that I’ve been late to pick Ayla up.

I knew it was going to happen at some point and surprisingly I wasn’t as stressed out about as I thought I might be, but it definitely didn’t sit right.

I just kept reminding myself that Ayla doesn’t get picked up til 5.15 on Tuesdays when I have uni, and I kept pushing to the back of my mind that at least on those days Ayla goes to day care with the extra milk she needs to see her through.

Thankfully though when I arrived to collect my baby girl she seemed unconcerned, playing in a corner with a big box of blocks.

I cuddled her and kissed her and apologised for my lateness to which Ayla responded with a big, loud kiss on my neck.

The only thing I can attribute it to is the bottle of diluted cows milk she had at bed time and the zzzz’s were like music to my aching tonsilitis ears.

Mind you, that doesn’t meant I slept for 10 hours even though I did go to bed at 8pm when Ayla did.

No, instead I was up half the night nursing fever, chills, pain and killer night sweats.

But still, is it a new leaf?! Have we found an answer for a full night’s sleep? Gosh I hope so.

Even better than Ayla’s overnight sleep was her three hour nap today, which I took FULL advantage of by spending it sound asleep on the couch.

I had the day off work and wasn’t sure what to do with Ayla, whether to get up early and take her to day care like usual, or let her (and me!) sleep until we were ready the take the day as it comes.

I chose the latter.

When she woke at 1.30pm I opted to take her to day care so I could continue my wallowing in peace, but alas I felt so guilty for dropping her off while I was at home the sleep I drifted into was fitful.

Never mind. Another early night, 10 hours of uninterrupted sleep and a good coffee in the morning and I should be right! (Touch wood).

Ayla’s had a nudie-bum all day today, and she’s gonna stay that way until we get this darn nappy rash under control.

The rash has been there in minor since I first blogged about it weeks ago, but this morning it flared up and spread to Ayla’s gorgeous chubby thighs.

It’s so awful to see my flawless and precious Baby Ayla tired and in pain because it hurts to wee….

So after a quick phone consult with my mum this morning it was off to the doctors for Ayla and I, hoping to find a safe, quick, cheap and effective solution.

But alas, the doctor declared the rash was indeed “very bad” and prescribed a course of creams to knock it on the head and ease Ayla’s discomfort ASAP.

As much as I tell myself that nappy rash is normal, and common, and part and parcel of living in the tropics, I still feel guilty.

There seems to be countless – literally countless – remedies, solutions and preventative measures out there to keep Ayla’s bottom as smooth as a baby’s should be and I’ve gone and selected the few that didn’t work.

It’s amazing how quickly your confidence as a new mum can be shattered.

Yesterday, I was on top of the world; I felt fantastic, I was in control, and I was calm and confident.

Then at about 9.50am that confidence was shattered like a champagne glass dropped from a fourth storey window.

Trigger? Ayla flung herself off the couch onto the hard tiled floor.

First of all, she’s ok. A little bruise on her elbow and a 30 second cry before she forgot all about it.

I spent the rest of the day riddled with guilt, overwhelming self-doubt and fear….
Why did I put her there?
Why didn’t I grab her?
Did she hit her head?
How do I say I’m sorry?
Is sorry even good enough?

I know it won’t be the first time she’ll hurt herself, but I can only hope the guilt gets lessened and the self-doubt stays at bay!