Here’s the video of Ayla playing the miniature grand piano Hubby and I gave her for her first birthday!

She loves it! Maybe we have a prodigy in the making?

Or maybe Hubby and I will just have a strange ringing sound in our ears for for ever more!

I love having a musical baby.

Now I know why mums drink wine while they cook dinner! 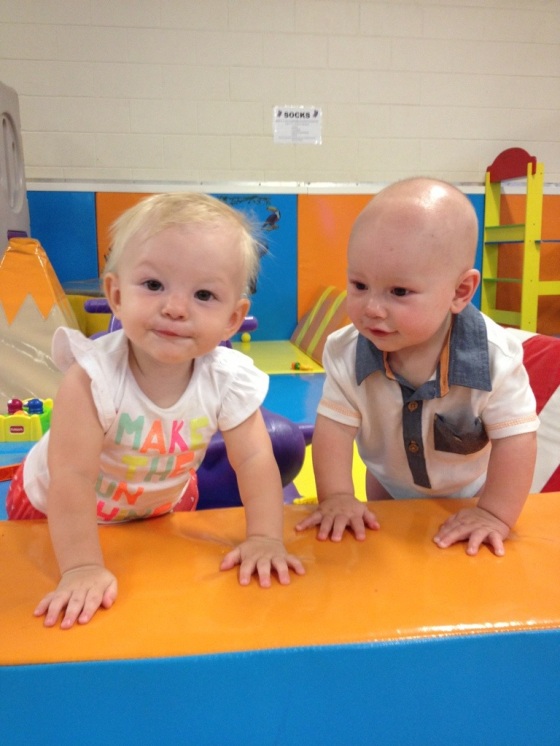 It was her first official music lesson this morning and we arrived a few minutes late. As we rushed through the door all the mums and their bubs were sitting in a circle on the floor singing a welcome song so I quickly took my seat and sat Ayla down.

As soon as Ayla’s bottom hit the mat she started bobbing along to the tune, clapping her hands and looking around at everyone with a huge, excited, goofy smile on her face; I could hear the song take an unexpected pause as all the mothers in the room breathed a near-silent “awwwww” at Ayla’s cuteness.

Ayla was engaged and active for nearly the whole class. She loved it when the musical instruments came out, but even during the sing alongs Ayla was moving to the rhythm and trying to mimic some of the sounds.

I was surprised by just how much Ayla seemed to be picking up and tried watching some of the other children to see if they were getting in to it as much as her but the closest I could see was a three year old boy who was dancing around.

After a lunch time pit stop at home we headed out again, this time to a local play gym that we’ve never been to before even though it’s literally walking distance away!

Ayla thought all her Christmases had come at once when I put her down in the toddler area; she was the only kid there at first so she had free range of the blocks, and padded shapes and ride-on toys.

Then her new little friend, Baby Caleb, arrived and the two kids hit it off straight away, staring into each others eyes and Ayla even gave him a little slobbery, open-mouthed kiss on the cheek!

It was all very cute and was a great way to spend a Friday.

I took Ayla to her first music class today; a special program designed to help babies develop a love of music and language.

It was really fun! There was quite a few babies there around Ayla’s age, and lots of new parents like me too, so we all felt silly and awkward together.

Ayla seemed a bit overwhelmed at first, I don’t think she could work out whether to watch the other kids, listen to the “teacher” or play with the instruments.

And there were heaps of instruments; from egg shakers, to drums, to tambourines, bells, triangles, maracas… they just kept on coming!

The whole session was really interactive, we adults sang and danced with our babies so that we could role model music-making and fun at the same time.

By the end of the session Ayla seemed to be getting into it all, although she couldn’t decide whether to wave her hands around, clap or screech, or all three at once.

But after it was over and we got into the car, Ayla started singing (well, trying out new sounds really).

It was as if Ayla had learned how to sing during the session and she’d just been waiting on some privacy to practice.