We left Melbourne today and headed for home, but the journey wasn’t as smooth as we’d hoped for!

Instead of being a three hour and fifty minute flight, we were on board the plane for over five hours.

We were delayed waiting for passengers on another flight and then we were the 13th plane in line for takeoff, which had us waiting on the tarmac for almost thirty minutes.

Ayla was tired and ready for a nap the moment we boarded, but with all the delays I couldn’t keep her awake until takeoff; she passed out in my arms before the plane had even moved.

I was worried about whether or not Ayla would sleep through the pressurisation of take off, given that she wasn’t sucking or chewing anything to help her pop her ears, but Ayla slept like an angel.

Until we were about 20 minutes in the air.

Then Ayla woke up, still tired because we’d got her up early and she’d only had one short nap, and Hubby and I were faced with occupying a one year old for nearly the entire four hour flight.

To say it was fun would be a lie, but it wasn’t awful I guess.

Thankfully we had plenty of toys and snacks to keep Ayla happy and amused but she squirmed and squealed and wanted to run about as much as she could.

We eventually arrived home and Ayla seemed pleased and excited to see The Dog and especially Cat Cat.

I caught Ayla trying to pick Cat Cat up, and after that was unsuccessfully Ayla resorted to kissing her on the head. It was super cute and lovely to know Ayla was happy to be home. 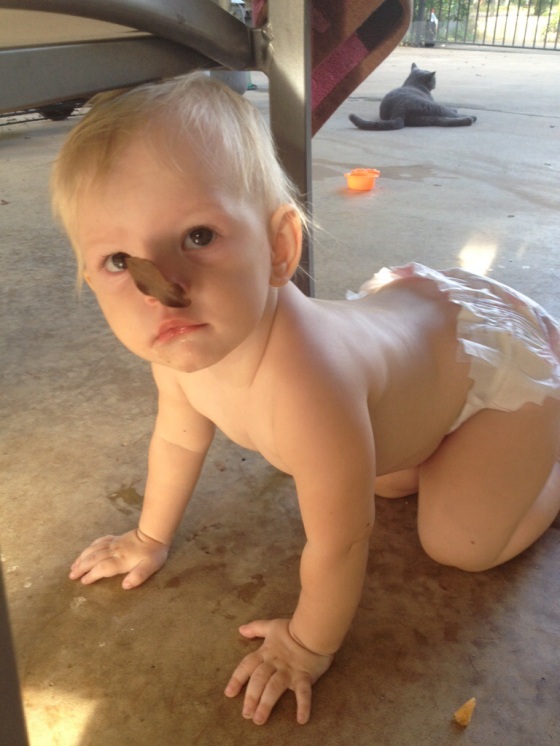 Ayla has reached that “copy cat” stage; everything I do she wants to copy!

If I’ve taken the lid off something, Ayla wants to put it back on.

If I make a noise, Ayla makes the same noise only seconds later.

This afternoon Ayla even extended her copy catting to include The Dog!

We were outside waiting for Hubby to get home and I watched as Ayla saw The Dog sniff and eat something off the ground (as dogs do).

No sooner had The Dog walked off Ayla crawled over to nearly the same spot, opened her mouth and put her head down to eat a solitary dead, dried up leaf… Who needs hands anyway?!

The result was hilarious. Ayla lifted her head and looked at me with bewilderment in her eyes, wondering what had happened to the leaf that obviously hadn’t made it in to her mouth.

I actually laughed out loud and dived for the camera because, as Ayla stared at me with wide, confused eyes the leaf was stuck squarely on the tip of her nose! 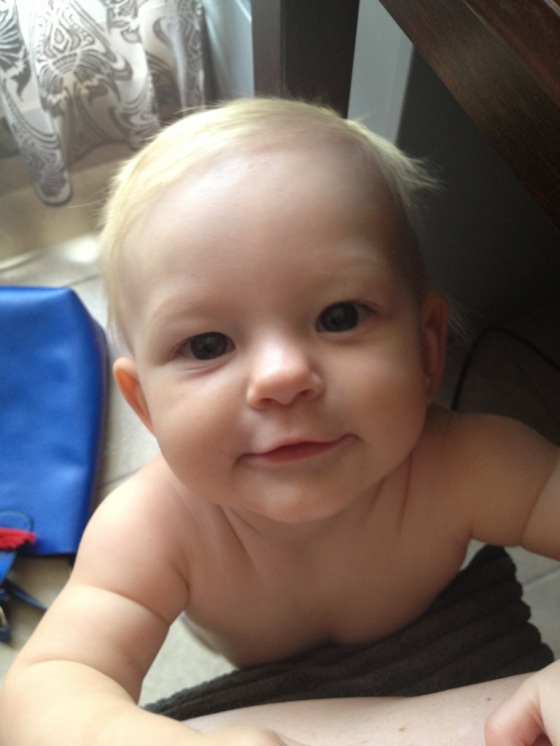 Ayla is a cat person I think. It’s not that Ayla doesn’t like The Dog, it’s just that today well… today I caught Ayla kissing the cat.

The friendship between Ayla and Cat Cat has evolved into something beautiful, built on mutual respect and undying intrigue.

For the first few months of Ayla’s life Cat Cat couldn’t have given two hoots about the pink sweet smelling bundle that only ever seemed to eat and poop.

By the three month mark Cat Cat had started to feel left out and neglected, her vacation from attention had become boring and she wanted to go back to being the household princess (but strangely enough and in true feline form, Cat Cat thought she could reclaim her throne by peeing our bed and defecating on the bathmat which of course did the complete opposite and almost saw her relegated to a different kingdom!)

Thankfully though Cat Cat eventually came to realise that Ayla wasn’t going anywhere and, in the spirit of keeping ones enemies close, made herself a new throne on top of Ayla’s wardrobe.

And there, in Ayla’s room, she has stayed.

While Cat Cats’ throne has changed its shape over the weeks and months – she’s tried the dresser, the nursing chair, the change table – for as long as Ayla’s been able to recognise her surroundings Cat Cat has been there, watching over.

At first Ayla’s interactions with Cat Cat were alway supervised but when Ayla became mobile that became much harder to achieve.

But despite all her relentless pestering and fur pulling Ayla has been scratched once and once only by Cat Cat and it wasn’t even hard enough to break the skin.

So today when the two of them were playing on the floor and Cat Cat had had enough, a no-claw swipe was all it took to stop the game in its tracks.

Ayla sat back, shocked, and shook her head as she stared wide-eyed at Cat Cat. I saw tears start to well up in Ayla’s eyes and my baby girl let out a whimper.

I thought that maybe Cat Cat had unsheathed a claw after all but then I realised that it was Ayla’s heart that was hurt by the fact her friend didn’t want to play anymore.

My heart collapsed in sorrow for my baby so I picked Ayla up for a cuddle and gave Cat Cat some time to regroup.

After a while when the incident seemed forgotten and Ayla was back on the floor with her toys, the house suddenly went quiet and the universal sign of “baby’s up to no good” started flashing.

I turned sharply not knowing what to expect, and found Ayla quietly on her hands and knees kissing Cat Cat on the head as if to say “I forgive you, lets never fight again”.

I put Ayla in her walker this evening to keep her occupied while Hubby and I had dinner, and after scooting around the kitchen for a bit she toddled off into her room.

Ayla was being a bit too quiet for my liking so I snuck in there and caught her trying to share her banana chip with the cat!!

Oh my goodness, poor Cat Cat is in so much trouble…. After a good sniff she decided she didn’t want the banana chip and promptly left the room.

But Baby Ayla followed, and chased, and rammed poor Cat Cat against the hallway walls until she finally freaked out and ran up her scratch post.

I was surprised how much Ayla got away with actually, but its only fun and games until someone little, and cute, with blonde hair and chubby legs gets scratched!

I caught Ayla eating her first “no no” today…. A bit of stick, kind of like a piece of knotted wood, complete with spikes and sharp bits. I’m going to keep it as a memento 😉

I took Ayla in to a pet shop today and she thought all her Christmases had come at once!

Ayla’s head was on a swivel and I thought it was going to fall off her shoulders as she looked around at all the bunnies, kittens and guinea pigs.

I sat Ayla down at one of the bunny enclosures to let her get a closer look (a give me a moments reprieve from holding a squirming child) and she just couldn’t get enough!

I tried to get her to take her eyes off the bunnies and look at me for a photo but she wouldn’t have a bar of it… And Ayla LOVES photos!

Oh! I almost forgot, as soon as Ayla saw the bunnies she started clicking! I don’t know if it was a happy reflex or if Ayla thought they were tiny white ponies, but it was adorable!

We couldn’t stay in the shop for long so we didn’t make it to the aviaries or the aquarium but I’ll definitely take her back soon, hopefully with Daddy in tow!

Ayla’s started to take an interest in our pets.

Whether she’s happy or sad, as soon as The Dog or Cat Cat come close Ayla goes quiet and freezes.

It’s cute to see her watching them; she must be trying to workout what on earth these strange furry creatures are.

It helps that both animals seem to have taken a liking to Ayla too.

Whenever I take Ayla outside The Dog gives her big slobbering kisses (he’s 45kg so his tongue is as big as her head).

And even Cat Cat slinks up to Ayla looking for a scratch nowadays, but I bet that will only last til Ayla starts pulling her fur!

It seems that Ayla’s best friend and ultimate protector is none other than Houdini (aka The Dog).

Houdini, a 45kg Boxer / Presa Canario cross, is our original “baby” and he’s been a huge part of our family for the last five years.

Houdini was made to love and protect but still, as responsible new parents, Hubby and I have carefully and watchfully introduced Ayla to Houdini over the past few months.

Then today I took Ayla outside in her bouncer and placed her on the lawn.

Houdini came hurtling around the side of the house, full of beans and boisterous energy and I worried he would knock her over!

But as soon as he saw Ayla, Houdini instantly calmed.

Without a word or signal from me, he went straight to my baby girl, gave each of her feet and one of her cheeks a quick lick and then lay down beside her.

Even where Houdini chose to lie highlighted his understanding that this soft, sweet smelling, tiny human was part of his pack; he had put himself firmly between Ayla and the front gate.

While I know this behaviour doesn’t mean the two can be left alone just yet, it certainly shows there’s a friendship like no other in the making. 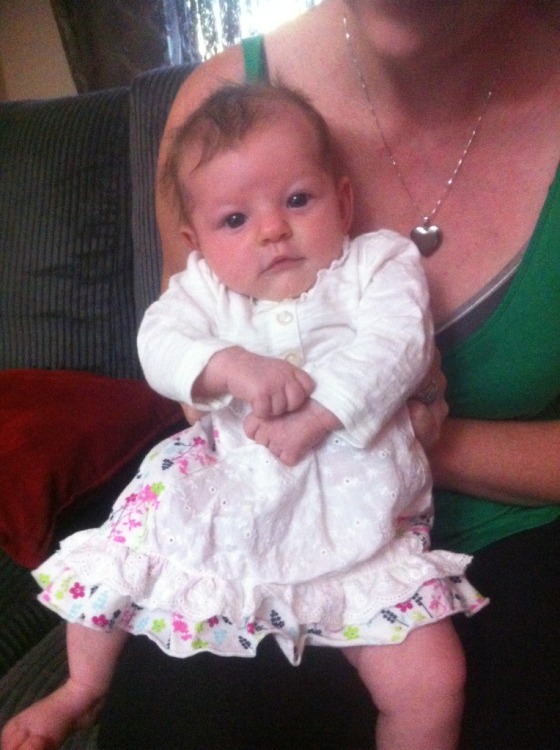 I’m a big believer in pets being an important part of childhood; they teach us about responsibility, boundaries, unconditional love and loss.

But knowing what it’s like to lose a pet doesn’t make it any easier when you get older.

Already, after just one day without her, our house feels empty. To us, Cat Cat was more than just a pet – she was family.

It’s a tough lesson and one that Ayla will have to learn one day.

Ayla’s pets will be her friends, her confidants and her adventure buddies but one day, after she’s raised them, trained them and loved them with all her heart the time will come to say goodbye.