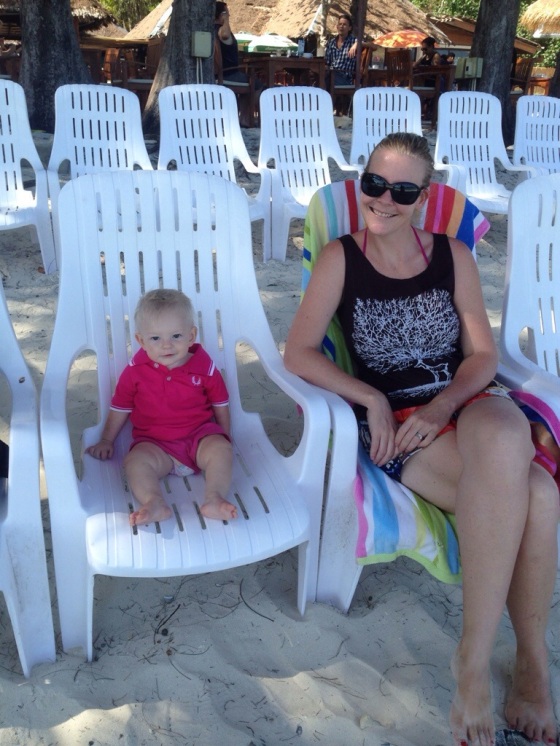 Our departure from Thailand has come with a strange mix of feelings between being sad that our holiday is over and being a little bit relieved that we’re heading back to the comfort of home.

As Hubby and I sat at the airport this afternoon, after a relaxing morning at the resort swimming, packing and saying goodbye to all of Ayla’s newfound Thai friends, we made a point of listing all the wonderful things we’ve done on this family holiday so the illness that struck each of us down wouldn’t win out.

Ayla met and rode her first elephant and she played putt putt in a dinosaur park that took us through an active (replica) volcano.

Ayla also destroyed her first sandcastle on the beach, she felt the buoyancy of ocean waves for the first time, she visited Fantasea theme park and even won her first prize on a carnival game!

Ayla hand fed thousands of tropical fish, she saw monkeys and lemurs, and iguanas. Ayla rode in a tuk-tuk, rang the bell in a bar and fell asleep on her Dad’s head.

We also made new friends from the other side of the world, dined in luxury restaurants, floated in stunning swimming pools and relaxed on a tropical island.

So all in all, we can’t complain! It definitely was a great holiday with lots of great memories to bring home.

But it seems the dreaded illness isn’t finished with us yet!

Ayla has had an upset stomach all day despite this being her fifth day without eating solids, and as I write this now in Singapore’s Changi Airport her temperature has climbed to 39.5 degrees…. Only four and a half more hours for red eye flying until we’re back in Australia. 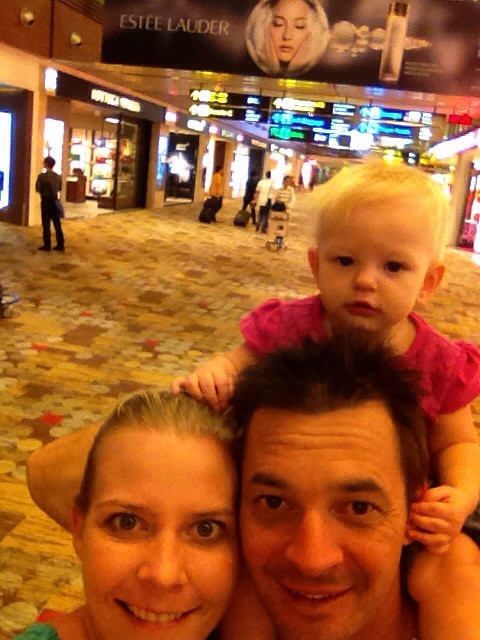 Our house felt electric all day today, partly because of the adrenalin from seeing Hubby win last night and partly because we’re going on our first ever overseas family holiday tonight!!

Baby Ayla was picking up on the good vibes and she was never far from the middle of the action, especially when the time came to pack!

Ayla started off curious about the suitcase but before long she worked out what I was doing and tried to help… By pulling everything out!

We eventually got our things ready and headed to the airport but by the time we boarded Ayla was tired, hungry and ready for bed.

It’s the first time I’ve flown with Ayla at night and Hubby’s first time flying with her at all, and I wasn’t sure how she’d go.

But the flight was nearly empty and we had two whole rows to ourselves so we were able to spread out and take turns between baby duty and napping.

Being a seasoned flier with six flights under her belt already, Ayla was really good and only had a few little cries that were appeased by “gas releases” and for the rest of the time she slept or played.

We arrived in Singapore at 9pm local time and after a bit of dinner we headed to the Transit Hotel within the Terminal for the night.

I must say I’m impressed!! The hotel is pretty flash; we have our own ensuite, TV and desk and the bed is massive!!

The cot they brought us for Ayla is even better than the one she has at home and if it wasn’t too late and we were too tired we might have even gone for a swim in the pool and checked out the gym!

Maybe next time, but for now… Zzzzzz!